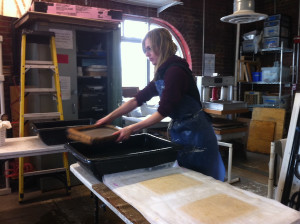 Jill Parisi is an avid hiker and traveler living and working in New York’s Catskill Mountain/Shawangunk Ridge area. Her work has been exhibited internationally, and is in various private and public collections. Significant achievements and awards granted to the artist include a New York Foundation for the Arts Fellowship in Printmaking/Drawing/Artists’ Books in 2005 and completion of public art commissions for New York City’s Metropolitan Transportation Authority’s Arts for Transit program in 2012, and for DC Government Services in 2016. Over the past decade, Parisi’s work has been selected for several International Print Center New York’s New Prints exhibitions; the Main Exhibition of the Krakow Printmaking Triennials 2012 and 2015; the International Print Network’s Graphically Extended exhibition in Oldenburg, 2013; the Museum of Contemporary Art Jacksonville 2016, and at Medjeback, in Falun, Sweden 2016-17.